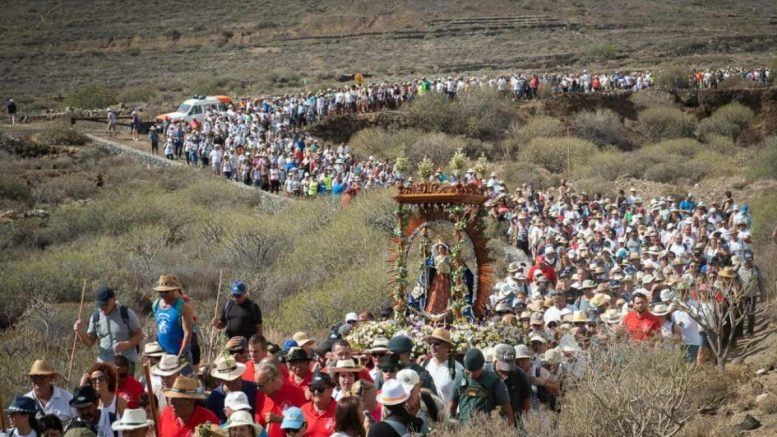 Two years later, after the suspension due to the restrictions due to the pandemic, like every September 7, even though it is a working day like today, thousands of people will gather from six in the morning in the Plaza de San Pedro de Güímar to accompany the Virgin of El Socorro in his traditional annual visit to the hermitage that gives his name to Chimisay beach where he appeared to the Guanches five centuries ago, according to Fray Alonso de Espinosa.

The Descent of El Socorro It is considered the oldest pilgrimage in the Canary Islands and it combines popular and religious fervor, where tradition is enveloped in the smell of basil and the generosity between the residents of Güímar and visitors makes it an important date on the calendar. , all to the rhythm of the tajaraste and the well-known ‘Pasodoble al Socorro’.

The Descent will begin at seven in the morning, after the mass offered an hour earlier by Bishop Bernardo Álvarez, and will run for six kilometers until reaching the hermitage of El Socorro after eleven in the morning, where throughout the day They will celebrate different acts, such as the meeting with the Guanches, until tomorrow they return to San Pedro again, already nightfall. After arriving at the hermitage, the welcome mass is celebrated at twelve o’clock and in the afternoon the image is transferred to the Cruz de Tea existing in the Llano de la Virgen and the ceremony of the apparition of the Guanches is carried out, to their completion, procession back to the chapel of Socorro. At night, after a mass dedicated to the faithful departed, the so-called procession of Las Candelas is celebrated.

For Gustavo Pérez, the first nationalist mayor of Güímar, this will be his first Bajada as such and throughout this week he has been excited. “The Bajada del Socorro is a motor of movement, a meeting party. The objective of the City Council is to take care of those people who make these parties of the people, we do not organize, we only support all the neighbors who make this great party of an insular nature more than a municipal one their own, ”says Pérez, who, as he did in her day the former mayor Carmen Luisa Castro, requests that “the Virgin of El Socorro can be the patron saint of Tenerife”.

The small hamlet of El Socorro, where some 300 people live, will today become a hive of people coming from the Güímar Valley and from all over the Island, not only with the Descent, but throughout the day and night, with parrandas that animate each of the houses and the taverns where pilgrims and visitors will crowd to quench hunger and thirst – a temperature of around 28 degrees is expected -, although the figure of 60,000 people is not reached, the limit that is included in the security self-protection plan.

Mayor by imposition, teacher by vocation and artist by devotion