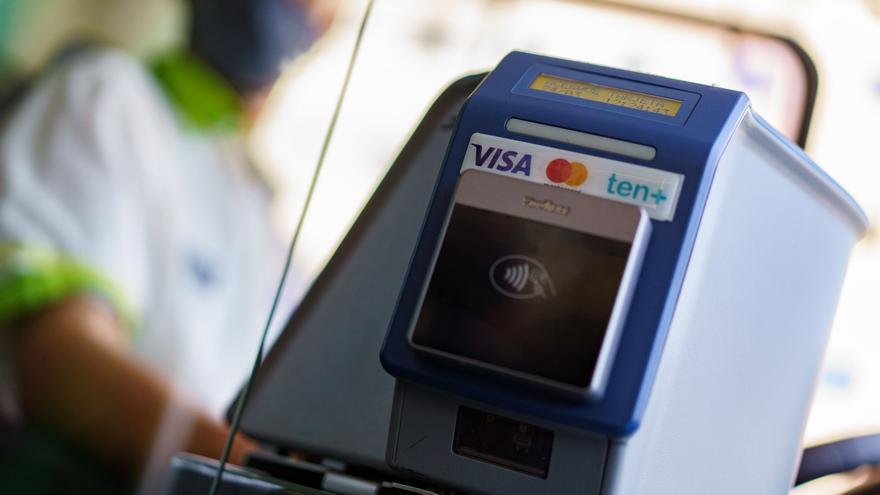 Transportes Interurbanos de Tenerife (Titsa), a company of the Cabildo de Tenerife, incorporates payment by bank card in 33 lines of the company, at the moment those that connect with the airports and the most used by tourists and visitors. The new system will be gradually implemented on the rest of the routes.

The presentation ceremony took place today outside the Santa Cruz de Tenerife Interchange, with the presence of the vice president of the Cabildo de Tenerife, Minister of Mobility and president of Titsa, Enrique Arriaga; the insular director of Mobility, José Alberto León; and Titsa’s manager, Raquel Martínez.

Enrique Arriaga points out that with this new payment option, access to public transport is improved and subscriptions are made easier, mainly for those users who are not regular users. “In this way, customers have the full range of possibilities in terms of payment and we adapt to user preferences, since payment by bank card is increasingly in demand,” he highlights.

In addition, Arriaga assures that 230 buses of the company already have the technology to validate and pay for their trip with a bank card, a number that will be progressively increased in the coming weeks. “It has been decided to start with the lines that connect with the airports and the most touristic ones because they are the ones that visitors and tourists use the most, who are potentially the ones who can pay the most with a bank card, at least until they acquire a transport voucher. depending on your stay or plans on the island”, he explains.

Users who choose to use the bank card will pay for their trip in a similar way to how it is currently done with the Ten+ card at the driver’s desk. The price of the trip will be the same as if you paid in cash.

The installation of this new payment model throughout the fleet, with which the same rates are applied as with cash payment, has involved an investment of 745,000 euros for the adaptation of the hardware and software of the Ticketing System.

The validation and payment of the trip can also be done through the Smartphone, smart mobile phone, and smartwatch for those who have their bank cards integrated into these devices.

As a requirement, only Mastercard and Visa bank cards that do not require a pin can be used.

The card validation and payment implementation project has had the participation of the winning providers of the tenders called for this purpose, such as Indra, Titsa’s technological partner for the integration of this new form of payment in the Ticketing System; and CaixaBank, as the acquiring bank of payments made by card.