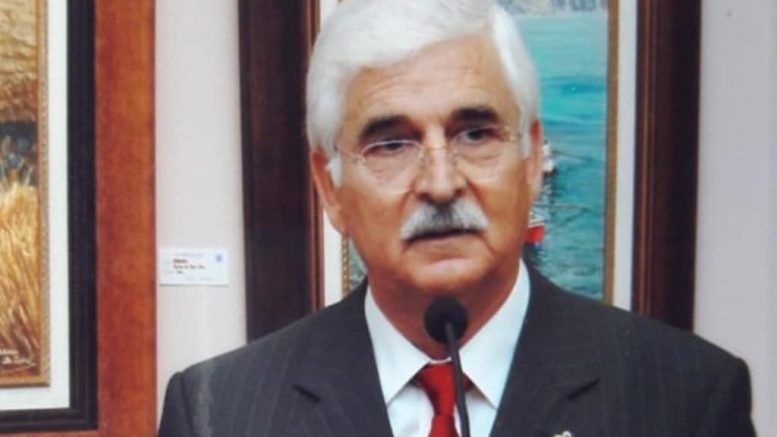 He was the first Favorite Son of the Villa de San Juan de la Rambla. But Esteban de León Delgado is much more than that: teaching teacher, painter, writer and former mayor of the municipality between June 1970 and April 1979. In addition to being in love with his town and each of its corners that he describes in his second book San Juan de la Rambla in my memory, a compilation of experiences of his vocation, teaching; his passions, such as music, collaboration in hospitals and nativity scenes; and politics, which he entered by force when he was 28 years old.

It was in June 1970. He received a telegram from the Civil Governor to attend a meeting on the 24th. He thought it was organizing for cultural and sports activities, as had been done in other schools, and he was not very surprised. But when he got to the appointment he didn’t see anyone “and that’s when my pulse began to race and my breathing got a little bad because I saw that this wasn’t normal,” he confesses.

When Gabriel Elorriaga Fernández received him, he extended his hand and said: “I greet the mayor of San Juan de la Rambla.” For an hour he tried to convince him that he would not accept the position because he was focused on his studies as a quantity surveyor, his piano lessons and the private lessons he gave at the San Alberto Magno academy-college of science and drawing. He finally had to give up all of it “because he made me understand that he was a public official and if he didn’t do it he had to be aware of the consequences.”

Of course, he promised that if after a year he could not continue, he would accept his resignation “but after six months the one who had resigned was him,” he says.

He arrived at the town euphoric, “because it was a pride to be mayor but also with unease and anguish because he did not know anything about municipal activity. I still haven’t been able to find a word to describe the state of mind he was in at the time,” he comments.

The beginnings were not easy at all. He encountered a “tremendous” problem because the pinocha del monte stopped being auctioned, the highest income that the City Council had at that time since the bananas began to be packed in boxes.
At the same time, the secretary requested a transfer and of the three municipal guards, one requested a leave of absence and the other two were on leave. “I found myself without officials, only with a bailiff. It was to close the City Hall.” He even had to do court work.

In the morning he gave classes at the school in the town – where he retired – and in the afternoon and on Sundays he dealt with municipal affairs. He still wonders how he could work with just a landline phone and a tracing typewriter to make copies.

The visits of personalities from other administrations to get things for the City Council were paid out of pocket and his car was “everyone’s”, which, for his economy, was a “disastrous time”, he maintains.

Over time a secretary came, some officials joined and at the end of 1974 a new municipal corporation entered with young and highly trained councilors and the situation began to change.

He remained in the Mayor’s Office until April 1979, when the first democratic municipal elections were held in Spain. All the parties asked him to continue and some even offered him a position in the Cabildo de Tenerife but he was tired, he wanted to stay away for a season and he never came back.

He recounts these memories in the book he presented last Thursday at the Rambla Cultural Space. A “casual” project given that he has always liked to write and has published articles, but the biggest impediment he had had until then was painting, one of his greatest devotions, “and for which he always found time where he did not have it.” there was”. He has made 32 exhibitions throughout the Island, most of them oil paintings of landscapes and work and activities of the Canary Islands.

The idea for the book arose when the historian José Oramas Luis published San Juan de la Rambla through the municipal records with a short biography of him. From there, Esteban began to add memories and experiences “which are also those of all the councilors with whom I shared the enthusiasm for a project.”

In addition to all these anecdotes, the former president has several pages in which he describes his native municipality “a town with which it is very easy to fall in love,” he stresses.