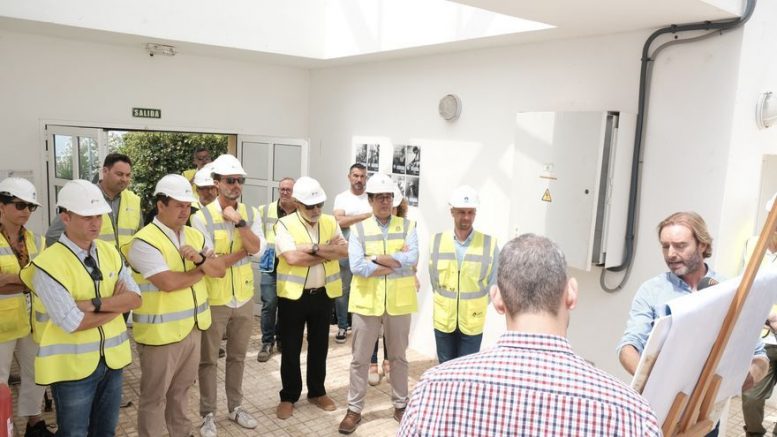 The most important productive agricultural area on the island will have 25,000 cubic meters of purified and desalinated water for irrigation once the expansion of the Adeje-Arona treatment plant is completed, with the construction of the Brackish Water Desalination Station (EDAS). The work, which began in October 2021, will conclude in the last quarter of 2023 and its commissioning will triple the flow that this complex now obtains (8,000 cubic meters) by incorporating 16,500 cubic meters of treated water into the irrigation network from San Miguel from Abona to Santiago del Teide.

The president of the Cabildo de Tenerife, Peter Martin, and the mayors of Adeje and Arona, José Miguel Rodríguez Fraga and José Julián Mena, respectively, visited yesterday, together with the island councilor for Sustainable Development and the Fight against Climate Change, Javier Rodríguez, the status of the work on the Expansion of the Purified Water Desalination Station (EDAS) of the Adeje-Arona hydraulic complex. El Vallito area. Its commissioning will make it possible to take advantage of 100% of the urban wastewater generated in both municipalities to supply the primary sector.

A total of 8,716,320 euros is invested in a work carried out swallow and included in the Strategic Framework for Insular Development (MEDI) and the Canary Islands Development Fund (Fdcan). The works consist of building a feed tank and perpetual pumping of purified waterthe conduction channel, the reversible electrodialysis modules (EDR) –the technology to desalinate the water–, the chemical equipment and the channel for the resulting water.

Pedro Martín explained that the new desalination plant is part of the work carried out by the Cabildo “to improve and expand the island’s water treatment facilities, with the aim of completely transforming a scenario that was embarrassing and for which Tenerife had been sanctioned for discharges into the sea. In that framework, in the South region «we managed to purify 100% of the sewage from 2019 and now we are taking a step forward by providing these already purified waters with a special treatment to convert them into quality reclaimed water for agricultural use». With this work, “we are going to ensure that the entire agricultural area from San Miguel to Santiago de Teide can benefit from this top quality water for their crops,” emphasized Martín.

“In a climate emergency context, it makes no sense that, as a territory, we are eliminating resources.” It is the premise from which the Councilor for Sustainable Development and the Fight Against Climate Change of the Tenerife Island Council, Javier Rodríguez, starts to explain that “with these works, progress is being made in a key foundation of the circular economy, such as converting waste into new means”. As detailed, “the objective is to replicate in the South region the same model that has already been established in Valle de Guerra and throughout the Northeast region, and that we are going to continue applying in future facilities that will be launched through the according to Acuaes». He thus alludes to the “greatest agreement in the history of the Cabildo” that Pedro Martín signed with the State “to develop five large sanitation and purification systems on the Island and, in general terms, to put an end to the chronic and undesirable problem of residual waters of coastal pollution.

In that line, authorities and technicians highlighted that the expansion of the Adeje-Arona submarine outfall is underway to move the point of discharge away from the coast. The brine from the Adeje-Arona desalination plant and the purified water that is not reused are discharged from the Adeje and Arona divide, on Troya beach.

The mayor of Arona, José Julián Mena, underlined the importance and the steps forward that are being taken, both in water purification and, in this case, in its reuse for agricultural use, which deepens the commitment to sustainability and the support to the primary sector that is carried out from the municipality. “Investments in water purification and the reinforcement of its reuse for the primary sector are fundamental for us, for Arona and the whole of the South region,” explained Mena. The aronero alderman recalled the 41,536,757 euros of the contract for the execution of the works and performance tests of the project of the collectors and drives associated with the treatment plant of Montaña Reverón. “All this speaks of the firm commitment to sanitation, the reuse of water, to improve our hydraulic capacity and to apply sustainability policies, essential for municipalities such as Arona.”

His counterpart from Adejero, José Miguel Rodríguez Fraga, defended that “we are taking an important step in a process that has been long and that addresses one of our main environmental problems, such as the use of water.” The mayor of Adeje stressed that with the Brackish Water Desalination Station “there has been significant progress in solving this problem that is not the most lucid politically, but it is one that requires greater commitment and responsibility on the part of the administrations , to satisfy a service with quality water for the population, tourism and agriculture».

From the perspective of the oldest councilor in the region, «The possibility of having 25,000 cubic meters of purified and desalinated water available daily to return it to agriculture is excellent news». In his reflection, he pointed out that “the process, in any case, is still alive to continue responding to the needs of this tourist area, with high water consumption, and to also recover water for reuse by the countryside.”

The work plan to build the Brackish Water Desalination Station (EDAS) is today in the civil works phase. The coexistence of the operation of the existing treatment plant since the 90s of the last century with the process of the new construction establishes a plus of complexity to this action.

The work has not yet met half of the planned deadline, although it complies with the designed plan (left). The authorities yesterday visited the works (next and below) that will provide the area with an essential water treatment plant for the region (above).

The work in progress will be a notable advance with respect to what is already being done in terms of water in the southern region of Tenerife. Currently, all the wastewater generated by the area is treated to eliminate its contaminant load. “What we intend is that, in addition, it goes through an additional treatment system to convert the purified water into regenerated water”, with the elimination of salts. Javier Rodríguez, island councilor for Sustainable Development, explained that the treatment plant currently treats around 27,000 cubic meters of sewage per day (30,000 in pre-pandemic figures). The treatment capacity for reuse is 8,000 cubic meters. “What we want is to be able to treat one hundred percent of the already purified water.”